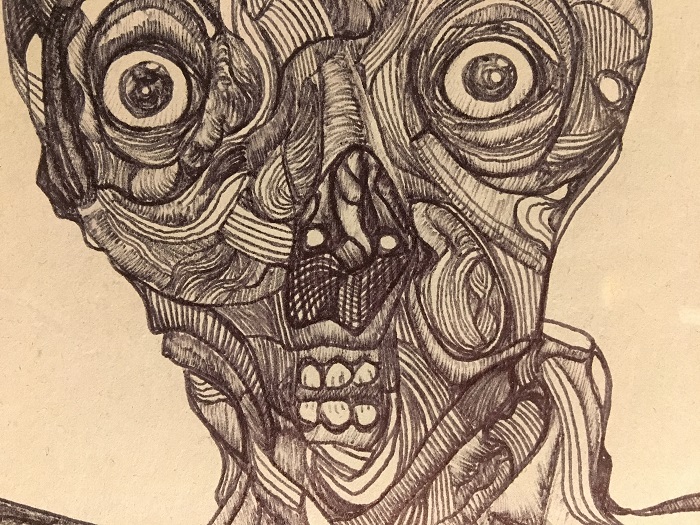 Between the point of laying down my book
And waking, later, lying on my back,
An eternity of nothingness, obscure,
Unlike so many other times before,
Where mere sleep has intervened and I
Have known the place in which I’ve been,
The parameters of mind, behind the eyes,
The places I have visited in dreams,
Surreal worlds just dull familiar scenes,
But here’s a vacuum, how much time has passed?
It may have been no time at all, and yet
It made the greatest difference there could be,
Because on re-emerging, I came back,
And knew that I’d come back to being me.
I set about to quite recall myself,
But started with remembered colour, blue.
I felt its calm familiarity, at first without its noun
And then the word arose, or did it land?
It seemed to come from outer space at first.
But knowing it began a chain reaction in my head,
And I recalled my mother, ten years dead,
And then my father, living still, alone,
And time slowed down and then seemed to expand
And I saw my elder sister, aged just three,
Upon a tricycle, on rough, flagged, pale grey floor,
And recognised the wrinkles of the stone,
At Swinsty in the entrance corridor.
And then my younger sister reappeared,
And seconds later she too had a name,
And then a little while must have elapsed,
And time seemed stopped, suspended once again
Until the shock of recollection of a spouse
Four children of my own, a lovely house.
And here I was, beside the dog, in my old bed,
The light still on, my novel on the chair,
At peace with a contentment which felt earned,
As if I'd passed a test, had won a game,
Alive and well, reborn, and quite returned
From emptiness and vacancy and black.


Posted by Alison Houston at 18:23 No comments:

A Happiness Remembered In A Dream

A happiness remembered in a dream:
A baby on my shoulder, nodding off,
Emitting little noises and a warmth
And sweetness like no other thing on earth;
As I sing every song I know, and try
To turn each one into a lullaby.
And then on waking suddenly, the shock,
Of finding that the baby is a man.
I plan and scheme in every way I can
But there’s  no way of turning back the clock.


Posted by Alison Houston at 19:01 No comments: