This was an error code that came up when I tried to look at the Spectator.  As I couldn't I decided to write a childish, poem instead. (I'm going for. a 503, I may be some time.)

I did try,
Sat there straining,
But I'd run out of suppositories,
I wanted to cry,
It was like giving birth.
I pushed and pushed
With strength that should have moved Heaven and earth,
There's no point in explaining.
But, on the bright side,
I saw stars, and thought of Elvis,
Gyrating, or was it writhing in agony?
I imagined passing out,
Like he did,
Thought of my life,
Ending like this,
With knickers round my knees,
My face contorted,
Longed for it to pass out,
Thought of calling the midwife,
Or the Fire Brigade,
And beg them "Help! Please!"
But they'd think I was taking the piss,
I might be reported,
For wasting time.
There was pain, in my side and my pelvis,
I think I wailed.
There was nothing for it,
My attempt must be aborted,
I would have to use soap, like they probably did during the war,
Or in Victorian times.
Then I remembered a phrase that I'd heard before,
When something on the internet had stopped working
"503 back end fetch failed"
I hadn't known what it had stood for,
But now it made sense to me:
There was a number one, a number two and number 503.

Posted by Alison Houston at 22:07 No comments: 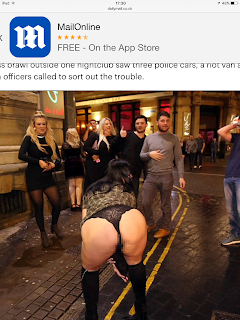 City of culture, my arse!
City of nothing new,
City of no one here's posh,
Nobody's feeble, southern, nesh!
City where I belong
With my black, net thong
Featured in the Mail -
Daily, not Hull!
City of Full view
Of giant, fat, pale
Hemispheres of flesh,
City of buttocks of fish wives,
More eloquent in their mooning flash
Their national, tabloid, internet splash
Than any amount of explaining.
City of fuck you!

Posted by Alison Houston at 18:08 No comments: